By: Beatriz M. Miranda (Co-Chair Staying in the Game Committee)

As we commemorate Women’s History Month, we are fortunate to look around our Chapter and see so many trailblazing women. One pioneer of women in the legal profession that immediately stands out is United States District Judge Elizabeth Kovachevich (affectionally known as “Judge K”). Originally from Canton, Illinois, Judge Kovachevich has blazed a trail for women lawyers in the Tampa Bay Area and beyond. Judge Kovachevich attended Stetson University College of Law and was the only woman in her class. She graduated in 1961, second in her class. After private practice, primarily as a sole practitioner, Judge Kovachevich became the first woman elected to the circuit court bench in the Sixth Judicial Circuit. Later, in 1982, she became the second female district judge in the Middle District of Florida and quickly assumed a key role in shaping the Middle District as we know it today. 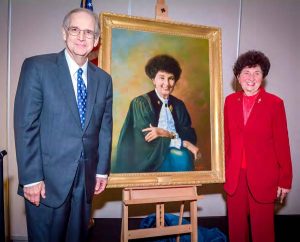 Judge Kovachevich with Chief Judge Merryday at her portrait unveiling in December 2018.

One of Judge Kovachevich’s great contributions to the Middle District was launching the Federal Judicial Internship program in 1989.  During her tenure as Chief Judge, Judge Kovachevich established Orlando as the District’s center and began the District’s transition to electronic filing. In 2016, Judge Kovachevich was honored as the recipient of the Federal Bar Association’s Earl W. Kintner Award for Distinguished Service. After thirty-six years on the federal bench, Judge Kovachevich assumed senior status in 2018. However, she has not slowed down, Judge Kovachevich remains the longest-serving active member of our Board of Directors and instrumental in our Chapter’s success. Judge Kovachevich is an example of true grit and the capabilities and accomplishments that women bring to the bench and the legal profession. We owe her a great deal for opening the door and holding it open for many lawyers in our community.