From the March 2021 TBCFBA Newsletter 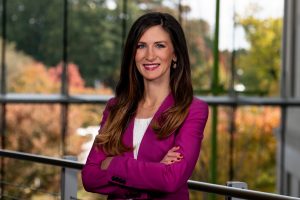 Q: How did you find out that you had been nominated to serve as a United States District Judge?

A:  The process occurred rather quickly for me.  I learned in June 2020 that Judge Covington had notified the President that she intended to take senior status.  Shortly thereafter, I submitted my materials to Senator Rubio and Senator Scott, as well as the White House Counsel’s Office.  I then interviewed with the White House Counsel’s Office and Senator Rubio’s Federal Judicial Advisory Commission for the Middle District of Florida.  In mid-July, I was informed that the Senators supported my nomination and that the White House intended to move forward upon completion of the background check.  On August 12, 2020, the President publicly announced his intent to nominate me to the Middle District of Florida.

Q: How did you become interested in the legal profession?

A:  Unlike many in the legal profession, I had no aspirations of becoming an attorney when I was younger.  Two things changed my course.  First, I took several philosophy classes in college and found a passion for the intellectual rigor of logical reasoning and argument, and law most naturally provided an outlet for using that skill on a regular basis.  Second, I spent a semester in Washington, D.C., working for a non-profit organization that combatted sex trafficking.  Most of the people I met through that experience had law degrees, and it seemed like a necessary tool to be an effective advocate on behalf of these victims.  I then set my mind on becoming a federal prosecutor with the goal of fighting human trafficking.  Although I spent most of my time at the Department of Justice prosecuting white-collar offenses, I ultimately fulfilled my original desire when I prosecuted the largest sex trafficking case in the history of the Eastern District of Virginia while I was serving at that U.S. Attorney’s Office.

Q: What motivated you to want to become a judge?

A:  I had the privilege of clerking for several great jurists on the federal bench, starting with Tampa’s own Judge James S. Moody, Jr., and concluding with Justice Clarence Thomas.  Through my experiences at all levels of the federal judiciary, I witnessed men and women committed to the rule of law and to upholding the Constitution.  I wanted to partake in that enterprise of interpreting the law as written and of preserving structural restraints of government through the separation of powers and federalism.  And, after having had the opportunity to serve the People of the United States while at the Department of Justice, I could not think of a higher honor or better form of patriotism than to be an Article III judge who is fair and impartial to all litigants.

Q: What is it like making the transition from government and private practice to behind the bench?

A:  My job as a district court judge is to get the law correct and to make accurate factual findings (when I am the factfinder).  I find that task very rewarding because I am not beholden to a client or policy agenda.  My role is simply to do what the law compels, no more and no less.  In that sense, it is an extremely liberating endeavor.  Perhaps because I spent almost my entire career in government service, I’ve not found it particularly difficult to transition to the role of neutral arbiter.  I had a similar mission when I was a federal prosecutor—I never charged anyone if the law did not support the indictment or if the facts would not support a conviction.  That said, I do miss the advocacy aspect that I enjoyed while in private practice, and I have found myself tempering my writing style to match the appropriate tenor of the court now that my role is not to persuade but rather to explain.

Q: What has been the best part about being a judge so far?

A:  Probably time with my law clerks and other colleagues.  We have a fabulous bench here in the Middle District of Florida, and it has been a joy to get to know the other judges more.  It is particularly humbling to me that I now get to serve on the court where I first began my law career as a clerk.

Q: What has been the most difficult part of serving as a United States District Judge?

A:  When you start as a district judge, your initial docket is comprised of inherited cases, some of which are in their infancy and others which are trial-ready.  It has taken me a couple months to get my hands around all of these cases and to establish my own internal chambers procedures.  As for long-term challenges, I’ve heard other district court judges describe this job as playing speed chess.  That seems like an apt analogy.  There are dozens of decisions to be made daily in important cases.  However, we often don’t have the luxury of prolonged periods of research and writing to draft the perfect order.  Judge Hodges used to say that the job of a district court judge is “to decide.”  I aim to do that expeditiously, while also doing my best to get it right every time.

Q: What advice or practice pointers would you give practitioners appearing in your court?

A:  In written materials, I place a high premium on clarity, brevity, and candor.  It is far more valuable to the court (and to your client) if the motion states the correct governing standard and why your request fulfills that standard than if it has nice-sounding, but ultimately inaccurate, puffery.  I also have little patience for any failures to comply with court deadlines, orders, or the Local Rules.  For hearings and oral presentations, I expect counsel to arrive on time, to be prepared to discuss any pending motion in depth, and to be respectful of opposing counsel.

Q: How has the COVID-19 pandemic affected the cases pending in your court and your chambers?

A:  It has created a bit of a backlog of trials that have been rescheduled, but the District has begun jury trials again.  I think the lasting impact will be that many civil status conferences and short hearings—particularly if counsel is not local—will continue happening via Zoom to save clients unnecessary expenses.

Q: Do you have plans to conduct an in-person investiture?

A:  Yes, my investiture is scheduled for October 27, 2021.  The District is hoping that we can all gather safely together in person by that time.

Q: Tell us anything you’d like the TBCFBA and the Bar to know about your judicial philosophy:

A:  I adhere to the jurisprudential philosophy of originalism and textualism that seeks to determine the meaning of the constitutional or statutory text as understood at the time it was ratified or enacted.  Per my Article III oath, I am compelled to state only what the law is—not what I want it to be or what I think it should be.  I believe this approach to judging allows the judiciary to remain independent from outside pressures and impartial to litigants who appear in my court. In my view, the strictures of Article III were designed to ensure that the rule of law is upheld in every single case and that there is no appearance of partiality to particular views, which is vital to the flourishing of our Republic.