Our April Spotlight shines on Jordan Maglich, TBCFBA President-Elect. We took some time to sit down with Jordan and ask him a few questions about his Board experience and his practice. 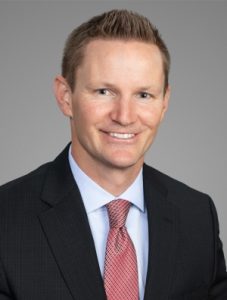 How long have you been involved with the FBA and what are your current duties?

I am currently serving as the President-Elect of the Tampa Bay Chapter.  Although the position has no specific duties, I’m soaking up all I can from the tremendous leadership shown by our current and recent Presidents.  I also view the position as a way to support other projects or issues being handled by other FBA officers or members.

I joined the FBA in 2010/2011 when I first began to practice, and later became more involved in the Chapter several years later when I served as Chair or Co-Chair for the Newsletter Committee, YLD, and Membership.  I joined the Board in 2018 and have enjoyed every minute of it.

Tell us about your law practice.  Where do you work, what is your position, what type(s) of law?

I work in the Tampa office of Buchanan Ingersoll & Rooney and serve as Counsel.  My practice is focused on complex commercial litigation with an emphasis in financial services, securities litigation, fraud recovery, and regulatory defense.  One of my primary practice areas involves the representation of court-appointed receivers in enforcement actions brought by state or federal regulators, where the receiver is tasked with marshaling assets for the benefit of fraud victims.  I’m proud to have been a part of teams that have collectively recovered tens of millions of dollars for those fraud victims.  I also represent financial institutions in litigation and arbitration proceedings as well as in investigations and actions brought by state and federal regulators.

Tell us about your special career achievements, awards, and honors.

Believe it or not, I have a Pro Bono Service and Excellence Award from the FBA right above my computer that I keep there to remind me of the value of pro bono service.  I consider myself extremely fortunate and lucky to do the work that I do, but I have always tried to make an effort to use those skills in pro bono efforts which I believe is one of the biggest contributions a lawyer can make.  Luckily, I’ve had mentors and bosses who always encouraged me to pursue pro bono opportunities.  From serving as a Guardian ad Litem, to handling a pro bono appointment through the FBA before Judge Covington that ultimately resulted in a favorable settlement for a federal inmate, to successfully filing several clemency petitions that were granted by President Obama for low-level drug offenders, pro bono not only requires you to come outside of your comfort zone but allows you to make a real difference in peoples’ lives.

What are your hobbies?

While there has been very little good to come out of the last year, I’m grateful for the opportunity to spend more time with my wife and newborn baby boy.  Prior to the pandemic, I enjoyed being active in the Tampa community, playing and watching sports, reading, traveling with my wife, riding my road bike, and getting out on the water whether it was fishing, diving, or spearfishing.

What is the best advice you ever received in the practice of law?

I may take the liberty of offering several pieces of advice, most of which is also applicable to a young or new lawyer.  One piece of advice was that no matter what, things will never be as bad or as good as they seem. That especially rings true in this profession where you can often became engrossed and caught up in a case or issue and lose perspective of the bigger picture.  Although it may never be easy, trying to take a step back often helps to keep things in perspective.  Another piece of advice is that there is no such thing as being over-prepared.  Especially as a younger lawyer, you should strive to have the best grasp of both the factual, and where possible legal, issues to provide the greatest value to your colleagues.  This also applies whether you are taking a deposition, at a hearing, or at trial; having a mastery of the subject matter puts you in the best position to be a successful advocate and lawyer. Another piece of advice, “Don’t F* it up!”, is also a good motivator to be as prepared as possible.  Finally, I was told that one of a lawyer’s greatest gifts is to use their skills to assist the less fortunate.